Genetic variation in heart valve cells of the developing fetus create the blueprint for the later development of mitral valve prolapse, according to the cover story of today’s Science Translational Medicine. The mutations cause defects in antenna-like cellular structures called primary cilia that previously had no known function in the heart valves. These findings were made possible by an international research collaborative that included scientists, geneticists, cardiologists, echocardiographers and surgeons.

“These tiny structures are really important in establishing how the heart valve develops in utero,” says Russell A. Norris, Ph.D., associate professor of medicine in the Department of Regenerative Medicine and Cell Biology at MUSC. Norris, who has been studying heart valve disease for more than 20 years, is senior author on the Science Translational Medicine article.

What made Norris and the rest of the research collaborative suspect these tiny culprits of playing a role in the development of mitral valve prolapse?

In mitral valve prolapse, the mitral valve, whose job is to keep blood flowing in one direction from the left atrium to the left ventricle of the heart, becomes enlarged and no longer closes securely, allowing blood to flow in both directions.

Many of the one in forty Americans who have mitral valve prolapse experience minimal symptoms. In some, however, this valve defect  can cause damage to the heart muscle itself. This can result in congestive heart failure, scarring of the heart tissue, and in serious cases, sudden cardiac death.

“These tiny structures are really important in establishing how the heart valve develops in utero.”
— Dr. Russell Norris

The research collaborative had initially assembled for a Leducq Foundation-funded project that culminated in 2015 Nature and Nature Genetics articles announcing identification of genetic variants that cause mitral valve prolapse.

The researchers, who have continued their collaboration, have since noticed that each of the genes they had identified could be linked to a pathway involving primary cilia. This led them to test whether removing cilia in mice would cause something like mitral valve prolapse.

“We have ways of removing cilia genetically in animal models,” explains Norris.

"We thought that if we took out the cilia in heart valve cells, then the mice should develop the same disease. And that turned out to be the case.”

Next, the team looked at a multigenerational family with a history of mitral valve prolapse to see if there was additional evidence for a causative role for cilia in the disease.

“Through many years of study we were able to identify a causative gene in this family, which ended up being a cilia gene.”

“A problem in the field today is that there are no really good animal models to study non-syndromic mitral valve prolapse,” says Norris.

“Now that we had a novel mutation, we felt obligated to develop a genetically accurate mouse model, which would enhance our understanding of disease initiation and progression.”

Instead of knocking out whole genes, as others had done, Norris and his collaborators at MUSC used CRISPR CAS-9 technology to “knock in” the genetic mutation identified in the large family.

“We knocked in the mutation, and it fully recapitulated the phenotypic spectrum of the disease and impaired formation of primary cilia during development,” says Norris.

“These mice were quite beneficial in that they confirmed that mitral valve prolapse could be caused by a defect in cilia formation during embryonic development.”

Finally, the research team used an existing dataset from a previously conducted genome-wide association study, in which they looked at 300 known cilia genes to see if there was an association between the variants and mitral valve prolapse.

“We found that there was an increased prevalence of cilia gene variants in the mitral valve prolapse population,” says Norris.

“Whether it’s relevant to ten, 40, or 70 percent of the broader population, we don’t know yet.”

Norris now hopes to use the unique mouse model the team has developed to better understand the temporal progression of the disease.

“Mitral valve disease is most commonly seen when somebody in their fifties or sixties,” explains Norris.

“Yet, all of these genes that we've identified that cause mitral valve prolapse do not appear to be expressed in the adult. So how can a developmental error result in an adult pathology?” 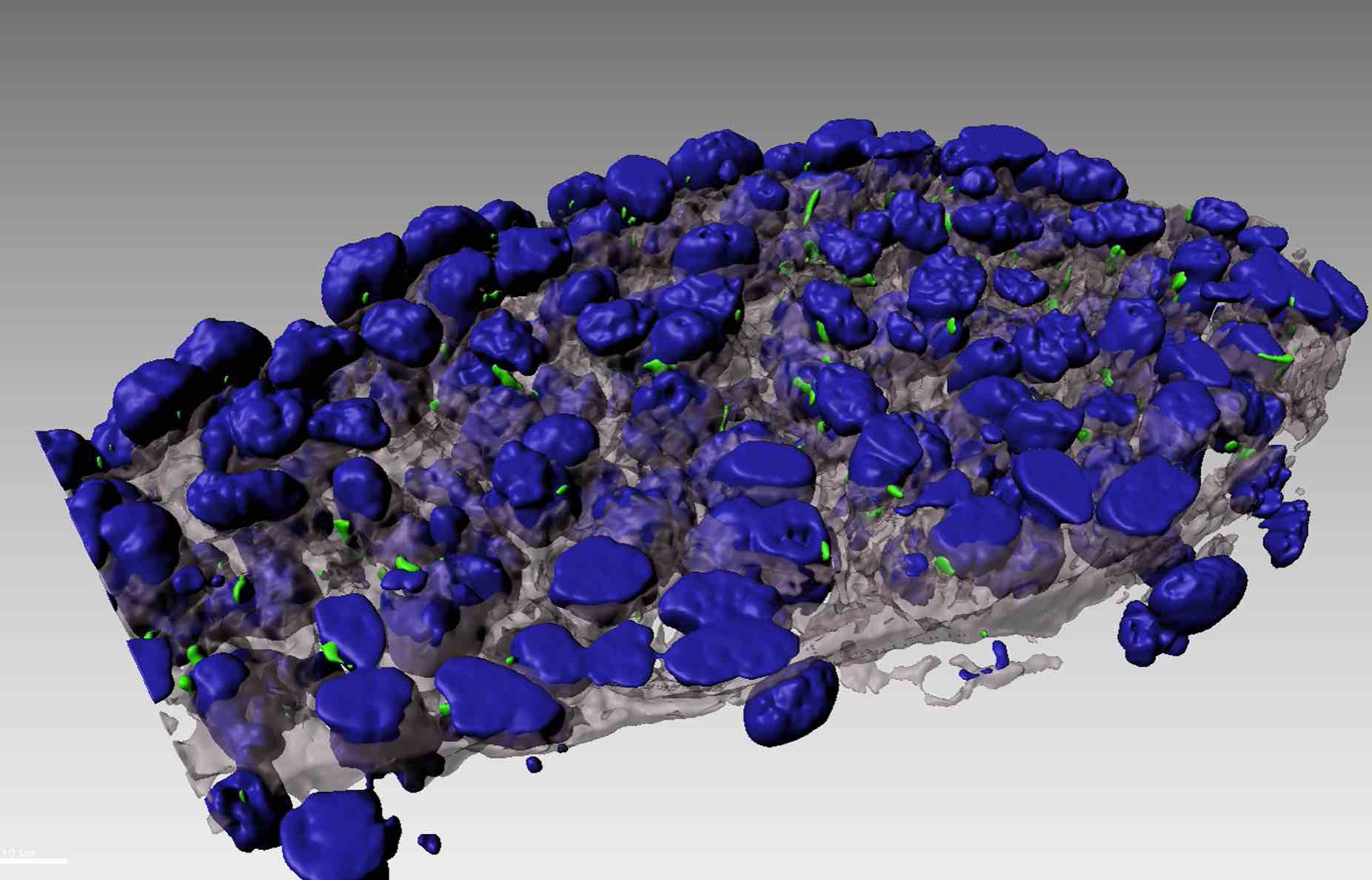 Primary cilia (green), which are cellular antennae that receive signals from the extracellular space (grey), are required for cardiac valve development.

Primary cilia (green), which are cellular antennae that receive signals from the extracellular space (grey), are required for cardiac valve development.

The research collaborative’s data indicate that mitral valve prolapse can be present early but is clinically benign and not likely to present with any symptoms. The disease can take decades to become clinically relevant and represents a slow degeneration of the tissue. Possibly contributing to that degeneration are changes in the geometry of heart tissues and valve anatomy that cause secondary defects.

“So we think that the geometry change, combined with altered biomechanics plus additional secondary responses that have yet to be discovered, result over time in the tissue being destroyed,” says Norris.

Norris will use his unique mouse model to test that theory.

“We're the only group in the world that has this particular model,” states Norris.

“We want to use this model as our test bed to look at the mechanisms and timing by which the disease  progresses.”

Norris also hopes to begin to identify biomarkers of disease severity that could inform treatment. He will work withcardiothoracic surgeons in Leipzig, Germany and echocardiographers in Boston, who are collecting biopsy specimens from patients with mitral valve prolapse. He will compare those specimens with tissue biopsies from his animal model.

“Once we have the biopsies, we can then correlate changes in protein profiles in valve and heart tissues in humans with those in our animal models to look for markers of disease severity and/or progression,” explains Norris.

“Is there something predictive in the patients that will allow us to know that they are at a particular stage of fibrosis or heart failure or let us know what sort of outcomes they are likely to have?”

The findings of a developmental cause for some forms of the disease by Norris and other members of the collaborative team could signal the importance of early intervention and lead to rethinking of current treatment guidelines.

“If you have mitral valve prolapse, our findings suggest that you may not want to wait for intervention,” says Norris.

“There’s a good chance that your heart is already being stressed and that changes in the heart muscle have already begun, which may be difficult to reverse. So earlier intervention is likely better. We're hopeful that, with the help of additional funding, some of our discoveries will help change guidelines for the timing of surgical intervention as well as lead to non-surgical therapies to treat the disease.”